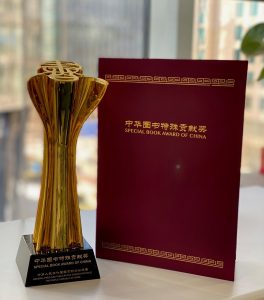 Among the cohort of 15 writers, translators and publishers honored with the 2020 Special Book Award of China was one American: UW-Madison’s Halls-Bascom Professor of Chinese Literature William H. Nienhauser, Jr.

The annual award celebrates books as a cultural bridge and is China’s highest publication prize for foreigners. Professor Nienhauser, who retired in the spring after 47 years on the UW-Madison faculty, is among 153 awardees from 54 countries to have received the award since the program started in 2005.

He was nominated by Nanjing University Press for his leadership in the team project to translate into English a multi-volume classic text from Chinese literature, the Shiji 史記, a first century BCE history of Chinese civilization up to that point. Professor Nienhauser’s team renders the classic as “The Grand Scribe’s Records.”

At the book award ceremony in Beijing, held December 18, Professor Nienhauser was commended for being both a specialist in ancient Chinese literature and a mentor to many in Chinese studies.

“His translation of The Grand Scribe’s Records, regarded as the most complete and academically valuable translation of the scholarly work, is widely praised by Western scholars,” said Vice Minister Zhang Jianchun, who presided over the award ceremony.

COVID19 public health restrictions limited the scope of the award ceremony and prevented the awardees from attending the ceremony. However, Professor Nienhauser was among four who sent pre-taped acceptance comments that were broadcast at the ceremony, attended by a small audience of ambassadors, consular officials, and publishing industry representatives.

“Looking at the lists from previous years, I realize what a great honor it is to be among the 15 awardees this year,” Professor Nienhauser said, speaking in Chinese (see photo at top of story).

He noted that his Shiji translation project started in 1989 and resulted in eight volumes containing over a million words. He also asked that his honor be shared with all of his collaborators over the years.