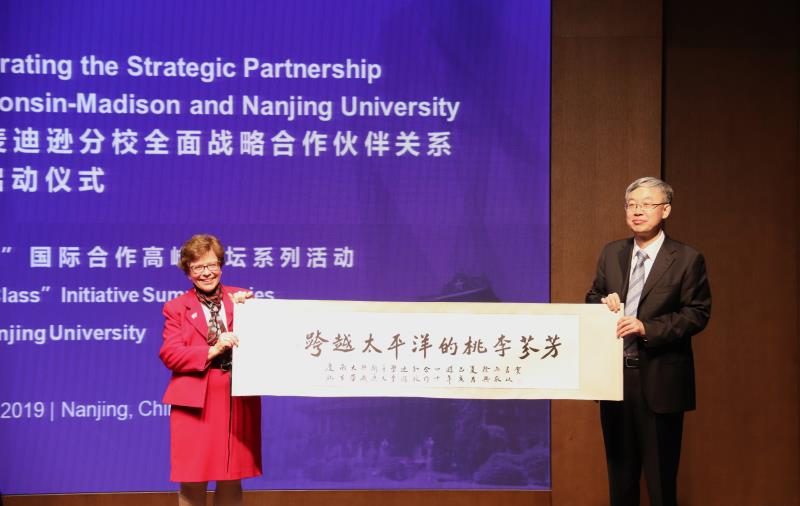 NOTE: this is a re-post of a news article published June 18, 2019, by University Communication:

In 1979, University of Wisconsin–Madison Chancellor Irving Shain led one of the first university delegations to China of the post-Mao era. Among the universities visited was Nanjing University (NJU), one of China’s top universities and a current member of the elite C9 League. Forty years later, another UW chancellor, Rebecca Blank, traveled to Nanjing University to mark the anniversary of this historic relationship and to set the stage for a new era of collaboration.

“Forty years ago, our two campuses joined hands, creating a new precedent in the field of Chinese and American higher education,” said Nanjing University President Lyu Jian. “In the 40 years since, UW–Madison has become the most important American partner for Nanjing University. In the 40 years to come, the collaboration between our two campuses will launch in new directions, and our friendship will no doubt continue to be praised.”

Several key ties between UW–Madison and NJU were highlighted by Blank during remarks given at the event.

Students and professors at the two universities also collaborate on areas of international significance. An intellectual property workshop coordinated by the law schools of both universities was held the same day as the anniversary event.

A conference on linguistics and literature organized by faculty experts from both universities was held the following day and focused largely on the translation, annotation and analysis of the Shiji — the Grand Scribe’s Records. Bill Nienhauser, Bascom Professor of Classical Chinese, has led the project for more than 30 years, during which he has organized annual, two-week workshops at Nanjing University on various chapters with about 30 graduate students and faculty from NJU and other universities. Three of the graduate students who participated in his workshops in Nanjing are now at Madison. Two are completing work toward their PhD under Nienhauser, and the other student working on her PhD at NJU, but studying with Nienhauser in Madison for a year.

“We are both large, public universities focused on research, and we both believe in the importance of international collaboration to advance scholarship and promote cultural understanding,” Blank said. “This has allowed us to build many connections across disciplines. Our students and professors are working together on projects of global significance.”

Strategic partnership between UW–Madison and NJU

Following the anniversary event, Blank and Lyu also signed a strategic partnership to encourage new linkages and student/faculty exchange programs. The partnership will also strengthen collaborations already in progress, ensuring that the partnership between UW–Madison and Nanjing University continues to grow for the benefit of students, faculty, staff and alumni.

Liu Jiandong, deputy director of the Foreign Affairs Office of the People’s Government of Jiangsu Province said that educational exchanges and cooperation are an important part of Sino-American multidisciplinary exchanges.

“This year marks the 40th anniversary of the establishment of diplomatic relations between China and the United States,” Liu said. “For the past 40 years, the relationship between China and the U.S. has advanced, achieving historic progress, and at the same time facing new challenges. In this context, for these two campuses to launch a strategic partnership is of even greater significance.”

New programs have already been planned for the 2019–20 academic year under the strategic partnership. A conference on intellectual property and licensing will be held in Madison as a continuation of the workshop held in May in Nanjing. Additionally, it is anticipated that a new student program will bring Nanjing medical students to Madison in summer 2020 for a custom medical-entrepreneurship program. A UW medical student exchange to Nanjing for a short-term clinical-entrepreneurship experience is also being considered for the 2019–20 academic year.

UW–Madison’s connections with Nanjing University run deeper than the 40 years celebrated. The first students from China arrived in Wisconsin as early as 1907. Among these were prominent UW alumni who returned to Nanjing University, such as Karl Chia Chen, who received a 1930 bachelor’s degree in literature and went on to direct NJU’s School of Foreign Studies.

The two universities reconnected in 1979 when Shain met NJU President Kuang Yaming. This meeting resulted in a close relationship between the two universities, allowing both to benefit through student and scholar exchanges. Shortly after Shain’s visit to Nanjing, Kuang led one of the larger visiting scholar cohorts, arriving at the UW in fall 1979. UW–Madison also sent its first post-Mao study abroad cohort to Nanjing University in fall 1979. Additionally, English Professor Charles Scott arranged for one of his students, Mary Knapp, to become the first post-Mao era American English teacher on the NJU campus.

The chancellor’s visit to China was planned to recognize UW–Madison’s longstanding relationships and lay the foundation for partnerships and exchange. Looking toward the future, UW–Madison seeks to engage with alumni and partners in China to enhance the experiences of students on campus, develop innovative opportunities in science and technology, continue lifelong engagement with alumni, and collaborate on research in areas of mutual interest that draw on the strengths of UW–Madison and its partners.