Monday April 15 and Wednesday April 17, noon, Lubar Commons, University of Wisconsin Law School.  Two noon talks featuring Professor Emeritus David M. Trubek.  Monday’s lecture, “Re-gearing the Corporate Legal Ecosystem in a Re-geared World,” will include comments from lawyer and UW graduate student Sarah Marinho, and EALSC Director John Ohnesorge.  Wednesday’s talk, “China’s Rise and the End of Embedded Neo-Liberalism,” will feature a roundtable with Law Professor Emeritus Charles Irish, and Political Science Professor Emeritus Edward Friedman. A graduate of UW-Madison and the Yale Law School, Professor Trubek joined the UW Law School faculty in 1973 and served as Associate Dean for Research from 1977 to 1984. In 1985 he founded the UW’s Institute for Legal Studies which he directed from 1985-90. Professor Trubek was appointed as University Dean of International Studies in 1990 and became the founding director of the UW-Madison International Institute in 1995. He currently serves as co-Director of GLEE, the Project on Globalization, Lawyers, and Emerging Economies based at the Harvard Law School and as co-coordinator for IGLP’s Project on Rethinking Trade and Investment. 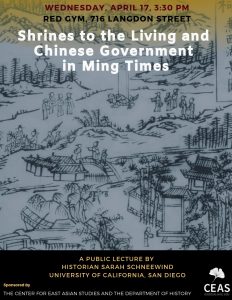 m (716 Langdon Street).  Public lecture by Sarah Schneewind, UC-San Diego, “Shrines to the Living and Chinese Government in Ming Times.”  Living shrines provided an institutional form of political participation for commoners. The ideology of the Mandate of the Heaven for the dynasty is well-known; living shrines enable us to see that magistrates and prefects in Ming times enjoyed a “Minor Mandate” that expressed their moral semi-autonomy from the emperor who delegated them.

Wednesday, April 24, 2:30 p.m., Memorial Union.  Public lecture by Leta Hong Fincher, “The Feminist Awakening in China.”  This will be a talk based on the speaker’s most recent book.  Through interviews with the Feminist Five and 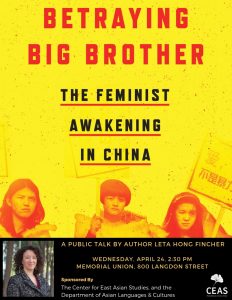 other leading Chinese activists, journalist and scholar Leta Hong Fincher argues in her new book “Betraying Big Brother: The Feminist Awakening in China” that the popular, broad-based movement poses a unique challenge to China’s authoritarian regime today. Her book traces the rise of a new feminist consciousness now finding expression through the #MeToo movement, and describes how the Chinese government has suppressed the history of its own feminist struggles and how the movement against patriarchy could reconfigure China and the world.

Thursday, May 2, 5 p.m., Room L140 of the Elvehjem Building.  Public lecture by cultural 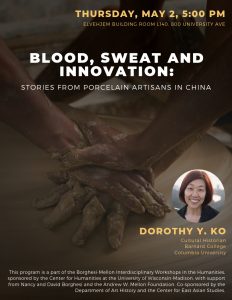 historian Dorothy Y. Ko of Barnard College, Columbia University, “Blood, Sweat, and Innovation: Stories from Porcelain Artisans in China.”  Professor Ko will adopt an “eco art history” approach to study a group of stories that circulates in the artisanal communities in Jingdezhen in south-central China. Prominent in these tales is the entanglement of clay, rocks, mineral pigments, and firewood with the artisan’s body (parts), especially sweat and blood. Into this volatile mix two other ingredients—an exploitative boss and corrupt government—round off the recipe for artisanal creativity and material transformation.