“China today is like an entrepreneur who has had a great run with a very simple organization but must now either reorganize to keep rising or stall out. This is a crisis of success.” 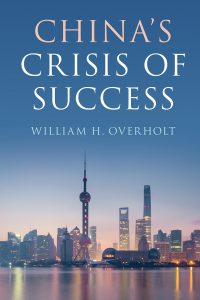 U.S.-Asia policy expert William Overholt will offer a public lecture on campus Oct. 10 based on his latest book, “China’s Crisis of Success.”  Arguing that China’s economic successes require a transformation, Dr. Overholt will describe how China is struggling with a needed transition, though Western views of this process “are frequently both strong and wrong.”

The lecture will be the fourth in the “Red Cap Lecture Series on China & Global Economics,” which was launched by Wisconsin China Initiative former Board Chair Wade Fetzer in 2014 to raise the “China literacy” of the campus.

The Overholt lecture is sponsored by the WCI, the East Asian Legal Studies Center, the Department of Economics and the Wisconsin School of Business.

As is the tradition for these lectures, the first 100 attendees will receive a free red WCI cap.